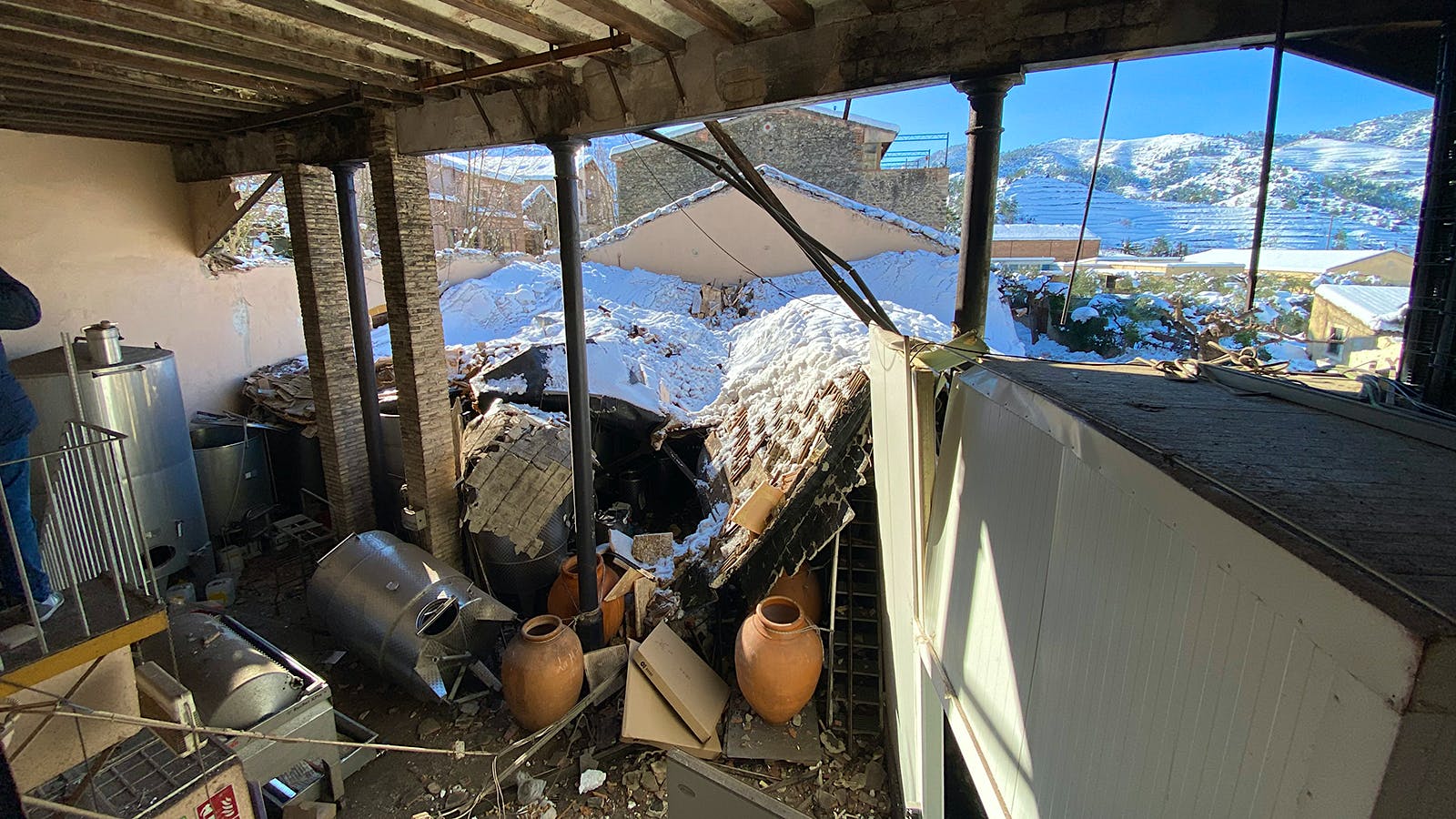 A record-breaking snowstorm in Spain collapsed the cellar roof of one of Priorat’s leading wineries, Vall Llach, destroying fermentation tanks and other machinery and possibly the entire 2020, 2019 and 2018 vintages.

While the rain in Spain is nothing new, snowstorms are something of a rarity in the Iberian Peninsula. Last weekend, Storm Filomena brought a record-breaking 20 inches of snowfall to Madrid and blanketed a large swath of eastern Spain in dense snow. Authorities report four confirmed deaths, and frigid temperatures, which will last until the end of the week, have created treacherous ice.

In wine regions located in more Mediterranean climates, buildings and roads are being tested with elements they weren’t built to handle. “The snow started last Thursday and continued with more intensity throughout the weekend,” said Vall Llach winemaker Albert Costa. “There has been around 2 feet of accumulated snow over two days, which is a good deal more than usual, but there is no forecast for more, just below-freezing temperatures that continue to keep some roads closed and have created ice hazards.”

Vall Llach was founded in the early 1990s by Costa’s father, Enric, and singer Lluís Llach. The winery is located in the mountainous town of Porrera, which sits at an altitude of 1,036 feet and has a population of 445. According to Costa, the area sees small amounts of snow every two to three years, but this past weekend’s volume of snow hasn’t been seen since the 1950s.

Vall Llach’s team is still assessing the damage to the cellar, which was used to vinify, bottle and store wine prior to release. “The building is in the center of the village on the main square and is called ‘La Final’. It’s a historic building that was built in 1882 and was one of the largest private cellars in Priorat prior to the arrival of the phylloxera plague,” Costa explained. “At the moment the roof collapsed we had the entire vintages of 2018, 2019 and 2020 stored inside.”

Authorities have not yet deemed the structure safe to enter, so Costa has not been able to evaluate the extent of the damage. But he has confirmed that the vast majority of stainless steel tanks, which were storing the 2020 vintage, are lost, in addition to vinification and bottling machinery.

Because road access remains limited, it’s uncertain what, if any, other buildings have been damaged. For Costa, a silver lining is that no injuries have been reported at the winery. “Thankfully, due to this happening in the early morning, luckily no one was working in the cellar and no one was out in the streets around it.”